Dr.Arun Kumar: A single person who have solution for Computer related injury in World 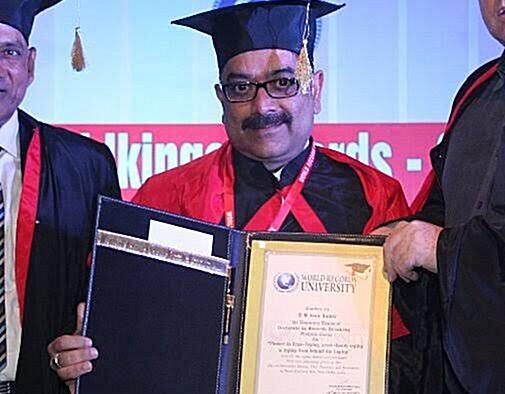 In today’s era, no matter how educated you are, if you do not know how to use a computer,  you cannot survive in any field. Whether you live in any corner of the world, doing job, be a student or have your own business, you cannot grow while ignoring the computer. It may be a matter of pride for a society that is constantly progressing, but with this we are getting some other things as our gift (sarcastically speaking), which we either do not know or we do not care about. That is, a computer injury called CRI (Computer Related Injury). He is not a famous hero of a big screen or a  leader of any political party but yes!!! He is… someone like that. When we are aware of a problem, we have information related to it or we tend to do a little research of our own. But what happens when we are UNAWARE of something which is going to harm us? We all are computer users. Maybe you are reading this article on your computer or laptop. While reading, your eyes, head or back maybe hurting, yet you are trying to read it on the computer screen by force, ignoring it. In such situation, if you do not know Dr. HM Arun Kumar, it is not a big deal. But if you are aware of CRI, you also want a solution, then you will undoubtedly know WHO HE IS. Arun ji not only has the solution of preventing CRI but he can also explain you the tricks to use fingers rapidly on the keyboard of your computer completely SAFE and FAST. These days, most of the work is done on computer itself. People often have to work in front of the computer for several hours on the key board. Due to  this, problems like headache, back and shoulders pain and irritation in eyes etc. are common. are becoming common. It is due to continuous work on the computer in an unscientific style of using it which is causing ‘Computer Related Injury’ and even include children. These days, the number of CRI patients is constantly increasing globally, but the discussion or concern among the common people about this seems to be far away.

Dr. HM Arun Kumar is the inventor of the safe techniques and prevention of health problems caused by computer users. He devoted his entire life for the research of this technique. Presently, he is the Founder and Brand Ambassador for Computer Injury Awareness and Prevention Society., Bengaluru and Expert Committee Member in Bureau of Indian Standards, Ergonomics Section,  a Life-Member of Indian Society of Ergonomics, Kolkata. He is an International Member of National Irish Safety Organisation (NISO), Dublin, Ireland. In addition, he is also an inventor of Supersonic Safe Typing Techniques and Ergonomic furniture specially designed to work safely on desktops as well as Laptops. He can work on computers in various styles. One of them is a Cross-Hand style. Not only this, he can type from 550 to 600 characters per minute on the keyboard. That is, about 10 letters in a second. During his performance on 12 May 2016, in front of the media at Press Club, Bangalore, he set yet another World Record of typing at 400 characters per minute by Sitting Behind the Laptop. He was awarded a certificate by www.recordholderspublic.co.uk. Due to these characteristics, his name is also recorded in the Limca Book of World Record. He has invented unique methods of training the art of touch typing just in 4 hours for normal, visually challenged and hearing impaired. People have come from US, UK, Singapore, Dubai and many other countries to learn the art of safe typing from him. His special skills have been mastered by Judges, Commissioners of various departments like, Police, Income Tax, Film Stars, Scientists, Doctors, Engineers and children too. Arun ji was very much attached to the computer from the beginning. He ran his fingers across the board in various ways. It was a fun game which he enjoyed. This fun used to get gritty when people would complain to them about problems caused by computers. Some would say – I got a stiff neck. Some would say – I am suffering from headache.  Probably, at the same time, a stubbornness was born within him and he got engaged in his research to find a solution. He wanted a solution to work  on computers  without  any sort of stress and strain.  After continues research of 25 long years, he ultimately got the result.  Now he has a perfect technology with the help of which computer users can protect themselves from this problem.

During a conversation with ‘Positive India’ he told that people all over the world who use computers in an unscientific manner face a lot of health related problems. The reason behind this is that no one taught   how to use the computer properly. He says that “Computer is a great machine and I want to spread my message globally about its proper use”. Gradually people have started to know about Dr. Arun. Recently he was invited to Nepal Medical College, where he addressed the students who were suffering from Computer Injury and demonstrated how they can get rid of this health problem and further work safely on the computer.

Dr. Arun believes that computer injury is more dangerous than AIDS and cancer because there is no medicine for it. Gradually, it will engulf the whole world. The situation becomes even more frightening when you do not know about the way of prevention as “Prevention is Better than Cure”.  Inspired by this anxiety towards the human community, he had written a letter to the Prime Minister’s Office of our country requesting to create a safety guidelines on computer use and implement it from the school level itself. There are many institutes who are quite sensitive about the seriousness of the matter. With the help of Dr. Arun, they have prepared a guidelines. Dr H M Arun Kumar in a meeting at the Health Department at New Delhi for framing safety guidelines in the presence of officers from HRD, Education, Labour, Digital India, specialist from Safdar Jung Hospital. Dr. Arun wishes that every country should implement such guidelines at their respective places and raise awareness as it has already reached around 80 million.  Presently, he is busy in this endeavor with all his strength. He says – All disturbances start when you place your fingers on the key board for the first time. It is very well explained to you ‘what to type’, but no one tells you how to type. While working on the computer, many things like your posture, distance between screen and eyes, type of  keyboard together give rise to this problem. Many researchers are even trying to use it by standing too to avoid the stress and strain. This is not correct. So he started an institute in Jayanagar, Bangalore with the aim of making people aware, where people are taught the right way to work on computer. The goal of this institute is not to increase business but to make the people understand that computers are not our enemies. If we work properly, then any health related problem will never affect us. However, in this context, Dr. Arun is going to address a conference in the US.  He has a great hope that this message will spread gradually throughout the world. According to him, I have taken multiple World Records by using the computer, hence have taken this initiative of building it’s awareness and motivate the computer users worldwide. Worldwide people are blaming this wonderful machine for all the health issues which is arising because of unscientific methods. Many researchers are even trying to use it by standing too to avoid the stress and strain. It’s Working Style which is missing and need to be educated.