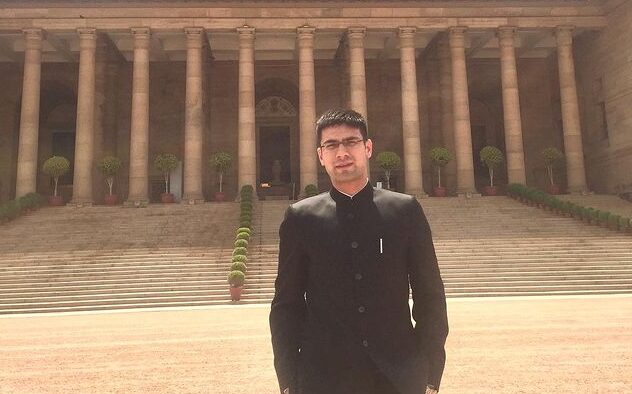 Life is a marathon and people are racing as per their grails. Some run for fame, some for money, some for the power to enchant others and the list goes on. Most of the people are consciously working for selfish interest. They think only about themselves and are busy in fulfilling their own needs. People are neither trying to devote time for helping others nor they have time to think of anyone else without purpose. However, there are still a few people who are not only concerned about the problems of others but also commit with passion in this direction. Our today’s story is about a young IAS who is doing his duty whole heartedly along with the responsibility to mentor the youth of the future. Career choices in various streams for today’s youth weren’t able to deplete the dream of joining IAS/IPS or Civil Services. This dream has always been attracting the youth. On the other hand, there are many such talents in our country who do not get the right resources to brighten their future. Keeping in mind about such a scenario, a young officer of IDES (IAS-allied) pledged to help and support in contributing for the future of the youth, future of the country and show them the right direction. IAS Gaurav Kaushal is a living example of how deeply the sensations of humanity and social service are engulfed in the hearts of high ranking officers. Gaurav is currently posted as Defense Estates Officer (DEFENCE ESTATES OFFICER JALANDHAR) in Jalandhar. Where he takes time out of his busy life along with duty, gives free coaching online to the students and youth who are willing to go into the civil service and government sector. He imparts career guidance and time management through his YouTube channel and Instagram. He strongly believes that fitness is as necessary as the academic preparation to achieve your target. Panchkula’s Gaurav Kaushal, who has become an IAS, started his life journey from a normal family, grew up in a Shaan-o-Shaukat. He has done self preparation for IAS and became a role model between youngsters. His success has set an example as enlightenment and life lessons of his part are illuminating the way of the entire younger generation as well. He feels as his responsibility to teach today’s youth that they should not give up and with work hard in consistency as their destination is waiting for them.

The journey was not easy Gaurav Kaushal, a topper since childhood, cracked the IIT exam after his initial education in Panchkula and got a seat at IIT Delhi but Gaurav did engineering from Punjab Engineering College instead. During this time, he aspired to do something for the sake of the country and he turned to the civil service and got ready for the civil service along with his studies in engineering. Gaurav cracked the IAS exam of 2012 on his own ability without any coaching and achieved 38th rank nationwide in the second list and illuminated the name of the whole Panchkula with his skill.

After not being successful in the first attempt, like other people, Gaurav must have got very angry on himself, from the breaking of the dreams of the family, all kinds of misgivings would have started in the mind but he failed in just one test and not in test of life. Courage is required to overcome the fear. Gaurav, who always looks at the silver lining, decided to strengthen himself by using that anger against his weakness. This quality should be inherited by him whereas youth give up quickly.

Success and failures are two sides of a coin but getting fail does not mean to stop putting effort. It is an opportunity to start over again. Loser is the one who does not fight the challenges and winner is the only one who is determined to do even after odds. The story of Gaurav Kaushal’s life struggle also tells the same thing. Because the journey from Gaurav Kaushal to IDES (IAS-allied) Gaurav Kaushal has never been so easy. Many troubles came, he failed in two consecutive attempts but Gaurav did not give up. He remained adamant on his stubbornness and engineering as well as in preparation for making the dream of the Civil Service come true and finally his passion and hard work paid off. After cracking the exam of Civil Service, Gaurav Kaushal’s first posting was as CEO in Kasauli in Himachal Pradesh. After this, he worked as a Defense Estate Officer in Chandigarh. Currently, IAS Gaurav is posted in Jalandhar as a defense estate officer. After success, everyone chooses a better life for himself, but there are very few people, despite being comfortable themselves, think of making others’ lives better. IDES (IAS-Allied) Pride is also one such person who leads the zealous youth of modern India who have a passion to overcome the odds. Gaurav Kaushal firmly believes in karma of life more than luck.

Gaurav teaches students-youngsters tricks online and through his YouTube channel which can prove useful for them in touching the civil service floor. Gaurav gets to interact with UPSC participants across the country by coming live on social media or through his videos and training them online. Many such videos have been posted by Gaurav on social media. In these, Gaurav talks on different topics and answers question of students. Gaurav also occasionally meets the participants when he get time.

During a conversation with Positive India, Gaurav says that it usually costs a lot to take coaching for UPSC and other competitive examinations and not everyone is able to take coaching. So after joining the civil service, he decided that he would help other participants through free online guidance. He took the help of Instagram and also created a channel on YouTube to connect. Gaurav Kaushal is a skilled officer as well as an experienced physical trainer and life coach. He balanced giving attention to his health by joining the gym during his studies. Even on the IAS exam day, Gaurav went to gym for work out. Gaurav believes that humans should be all-rounders. Taking care of your mind is also very important to stay physically fit, only then you will be able to give 100% in your work. This is the reason why Gaurav also suggests ways to stay fit by advising youngsters on career fitness as well as physical fitness. Gaurav further states that during posting in Chandigarh, many children would ask him many questions and seek guidance regarding fitness and career. During this time, he realized there is so much talent in the children of our country, all that is needed is to give that talent the right direction. This made Gaurav think of a campaign for future talents. IDES (IAS-allied) Gaurav Kaushal believes that our India is a country of youth and if the youngsters get the right directions in the right time, then our country will surely change. At the same time, Gaurav says that if a child successfully becomes an IAS with his help, it will be the biggest achievement of life for him.

Some of the hard working IAS get out of the limelight when they work out of the box and they themselves inspire examples to work. I.D.E.S. Gaurav Kaushal has also set a similar example.

It is said that when a person takes the path of progress, he forgets his land and roots but Gauravji has set an example of sensitivity and duty beyond the set limitations, which will be remembered not only for a long time but also inspire many in the country. Officers and prominent people are cherishing the thought. We look upto the day when officers of India will be as inspiring and self less as him and that day will bring a bright shining future. Positive India wholeheartedly salutes Gauravji’s passion and intentions.